For my son's 4th birthday party I planned another space-themed party. This one was more about "astronauts exploring the universe." 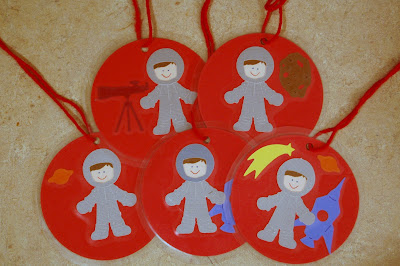 I made astronaut necklaces for each guest to wear. Once the kids had them on they were ready to explore! 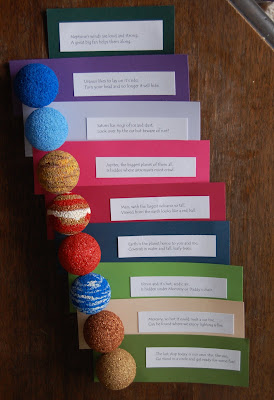 We went on a scavenger hunt and discovered all 8 planets in our solar system. I had hidden all the clues outside and the kids had to figure out where each planet was hidden. We started with Neptune and worked our way back to... 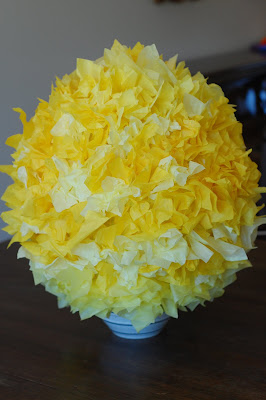 The sun! And not just any sun, a massive pinata sun! I spent all week making this paper mache pinata out of a punching bag balloon. It was huge! And it turned out to be too solid for the kids to break apart (I put three layers of newspaper on the balloon)! It eventually fell off the string and the kids just ripped it open while it was on the ground. 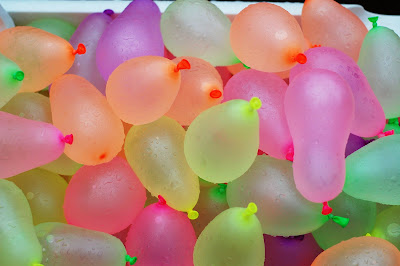 Next we played Meteoroid Toss! Two of the dads held up hula hoops and the kids had to toss water balloons through the hole. I told them that the hula hoops were the rings around Saturn and they had shrunk in size so we had to throw the meteoroids (water balloons) through the rings to help build them back up!

After we helped Saturn return it's rings to their normal size, we played Moon Rock Relay. I found some foam balls at the Dollar store and ripped them up into rock size pieces (it was harder than it sounds!). Then, I got four buckets, split the kids up into four teams and they were supposed to, one at a time, pick up a moon rock and place it in their team's bucket. Whatever team had the most moon rocks in their bucket once all the "rocks" were gone, won! 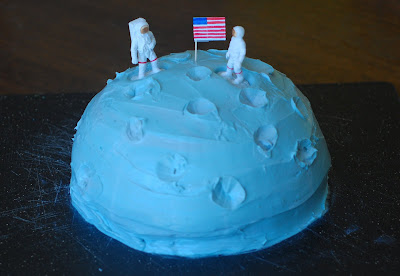 The only thing left for our astronauts to do was discover the moon. I made this moon cake by putting half the batter in an 8" round pan and the other half in a glass oven-safe bowl. It stacked perfectly! 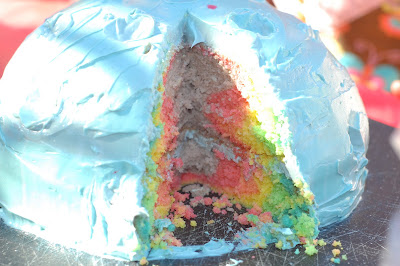 To make the inside more fun I did rainbow cake batter. It didn't turn out exactly how I wanted since I bought a yellow cake instead of a white. I'll know better next time!
Posted by Pippity Pop

AWESOME!! I love the meteroid game and thsoe clues are absolutely amazing and cute!

Space-Themed Birthday Party was so stylish. We're going to borrow that birthday theme idea for our twin’s upcoming birthday. It would be a grand party so I think booking one of the spacious San Francisco venues for the family and friends gathering would just be a perfect thing. What do you think about it?