My son has been talking about camping for weeks on end and I figured the only way to satisfy him would be to go camping! However, since we live in a state that is ridiculously cold and snowy for half of the year, having an actual camp out was out of the question. Hence, indoor camping!

First, it's not really considered camping if you don't have a campfire. Our carpet-safe campfire was made out of cutouts of each of our hands. 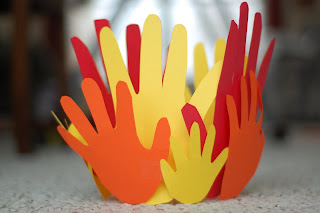 After cutting the hand prints out I taped them all together and formed a small circle with the adult hands, and a larger circle with the kid hands. We never even knew it wasn't a real fire! 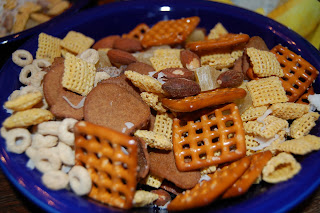 Once we had our fire built, it was time for the camping snacks. I had gotten a wide variety of trail mix ingredients so that we could each make our own individual trail mix. Delicious! Then, while we were sitting in our tent (aka - the blanket thrown over three dining room chairs) enjoying our snack, we took turns telling stories. 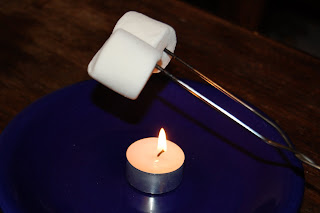 Once we finished with the trail mix and story-telling it was time to roast some marshmallows. Using a tea light worked fine since our son doesn't like to eat them when they're really roasted, he just likes the idea of it. We've also roasted marshmallows in the toaster oven by just leaving the door open and that worked great (and didn't leave a black residue on the marshmallows!).
Posted by Pippity Pop No comments:

I love games, it's what I enjoy planning the most, so I always make sure to have at least one for any party or group gathering that I plan. The preparation for this game was so easy to turn into two activities so it really worked out. 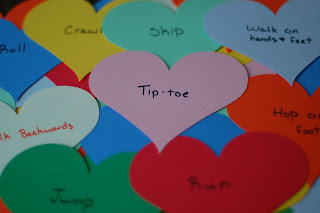 Depending on the size of the group, cut out hearts and write out different actions on each heart. You'll have to get really creative if you have a large group! The first activity you could use them for would be:

Find the Hearts
Hide all the hearts in a separate room before everyone arrives. Then, when it's time to start the games, have all the kids lined up at the door. Once they're ready open the door and let them search until they find all of them!

If you have an older group you could play:

Heart Scavenger Hunt
Have clues written down (either hidden with the hearts or on a separate piece of paper) that lead the kids to find each heart.

After collecting all the hearts I separated them into two bowls and we were ready to play:

Follow Your Heart
Divide the kids up into two teams and the put the bowls ot the opposite side of the room. On your mark the first child on each team runs to the bowl, takes a heart and does the action while returning to their team. Once they get back the next person in line runs to the bowl...etc. The first team to finish all their hearts wins! It's also a really fun game for parents to play alongside their own children, especially if you have younger kids in the group.
Posted by Pippity Pop No comments:

If you're tired of exchanging the same boxed Valentine's every year, try doing something different that's specifically from your child. It's a fun project to work on together and then it really means something to them! 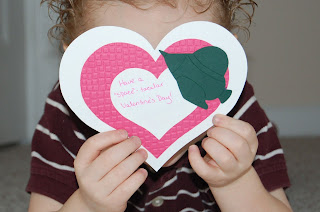 Last year we made space Valentine's because my son is a space and anything-relating-to-space fanatic! He chose the color spaceships that we put on the Valentine's and was so excited to give them to his friends. 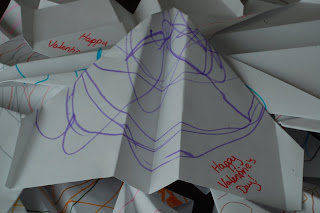 This year he colored white computer paper (because I'm cheap and didn't want to go buy colored paper) and then I folded them into paper airplanes using a paper airplane book he had received for Christmas. Again, something specifically from him and it was fun to watch the kids running around and playing with their airplanes together.
Posted by Pippity Pop No comments:

Having a Miss America party is a great excuse to have a girls night and there's no requirement that says you have to be interested in the pageant! 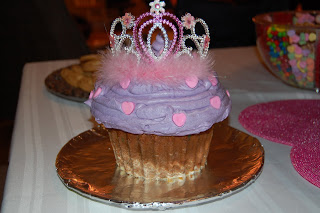 One of the best things about a party is the food being served. Food will inevitably bring people together! Having a fun dessert, like this cupcake cake decked out in it's own tiara, is a fun (and edible) way to show your guests what an awesome hostess you are. 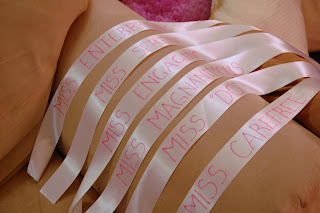 If you know who your guests are going to be ahead of time, having pre-made sashes for each one will make her feel special! Focus on one attribute and then find an interesting and unique word to fit her. It also makes for a great commercial-break filler to go around the room and have everyone read off her sash name after which you'll read the definition for the word. A great source to use? Thesaurus.com!

A fun activity to have for the evening is your own Q&A/talent portion. Prepare the talents and questions ahead of time and each guest will then draw a slip of paper out of a bowl to see what she will be doing. Tons of fun and you'll be surprised at what people are willing to do! If guests are too uncomfortable being the center of attention, have an option open that they can choose one or two people to perform with them. A few ideas to get you started:

-Recite the “Star-Spangled Banner.” (Especially funny when the person who chooses this one doesn't know the song that well!)
-Find a partner and perform a ballroom dance routine around the room.
-You’re famous for impersonating Michelle Kwan, show us a few of your best figure skating moves.
-Perform a dramatic reading of “America the Beautiful.”
-Perform an interpretive dance telling the story of Jack and Jill.
-You’re a famous fire baton twirler, show us one of your favorite routines.
-Perform a 10 second ballet routine.
-You’re a famous opera singer, perform “Twinkle Twinkle Little Star” like you would on opening night.
-If you were to write the next song that topped the music charts of 2010, sing a few of the lines that would be written in the song.
-If you had to choose, which cartoon character would you like to be and why?
-Your best friend just bought a new outfit and hasn’t even taken the tags off yet. She models it for you because she loves it so much. You see that it isn’t flattering on her and would never have let her buy it if you’d gone shopping together. What do you say?
-Would you rather direct, star in, or write the screen play for a movie? 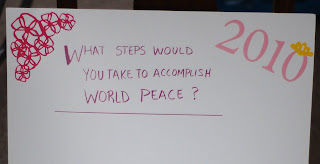 Another fun ongoing activity is to have poster boards around the room with Miss America related questions. Guests could write their answers down at any point during the evening and then the answers would be read off before they leave.

And, for some fun competition, have brackets for the guests to fill out to determine who they think will win. Guests would have to guess the Top 15, Top 10, Top 5, and then, of course, Miss America herself! Award 1 point for each correct guess in the first round, 2 for the second, 3 for the third, and 4 points for anyone who chose the winning contestant.

This is guaranteed to be a night that will not be forgotten!
Posted by Pippity Pop 1 comment:

I found this great idea for a fall-themed baby shower that could be geared towards either a girl or a boy. 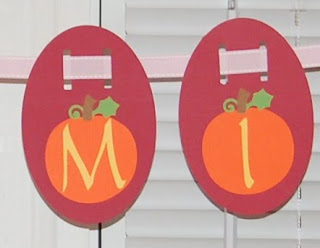 I made a banner that spelled out the name of the baby we were celebrating. It was a fun display and the mom-to-be even hung it up in her room at the hospital when she went in to have her sweet baby. 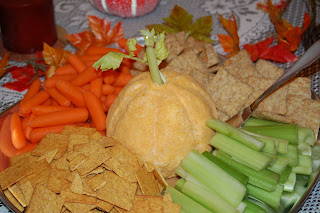 Most of the food that was served was pumpkin or fall-ish. A delicious cheese ball rolled in crushed Goldfish crackers and topped off with a small celery stalk to give it the look of a pumpkin. 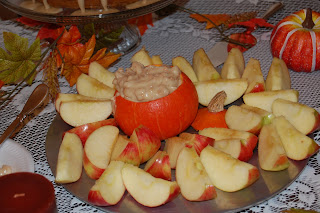 Apple slices with an apple dip served in a small carved out pumpkin. 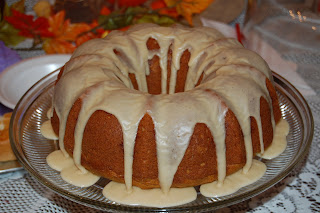 And a delicious pumpkin spice cake as a dessert! We also served soup, rolls, pumpkin bread, and donuts. Anything that reminded us of fall!

Two of the games we played also included, you guessed it, pumpkins! We split the guests up into three teams, gave them supplies to decorate the pumpkins, and said, "If the baby was a pumpkin, what would she look like?" After an allotted amount of time the decorating was finished and the mom-to-be had to pick which one she thought looked the most like her baby!

Posted by Pippity Pop No comments:

Labels: Baby Shower
Newer Posts Home
Subscribe to: Posts (Atom)
Welcome to my blog! I love delving into my creative psyche and I'll use any excuse to do it! I really enjoy planning activities/parties so if you'd like some ideas or help, please let me know! I'm more than happy to do some research and planning, all I ask is for permission to post whatever ideas we come up with!