Along with the Mario and Luigi hats we already had, I made some more character hats for the kids to dress up in for my son's Super Mario Galaxy 2 party. I cut out all the patterns with my Cricut, traced them onto felt, cut the pieces out, hot-glued them together and then hot-glued them to the hat. 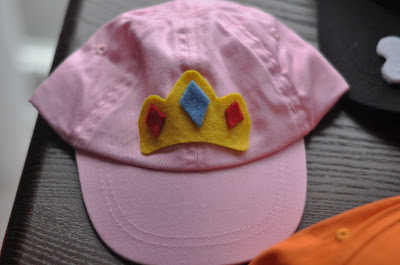 I made a mini Princess Peach hat for my 1 year old daughter so she could join in on the fun! 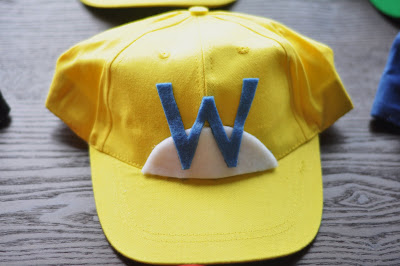 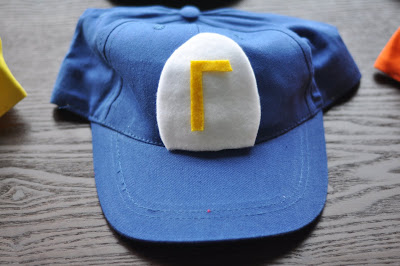 When I made the Mario and Luigi hats I actually sewed the white part onto the hat itself. With Wario and Waluigi I just glued it on and it was just fine. 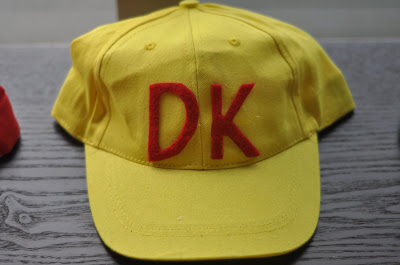 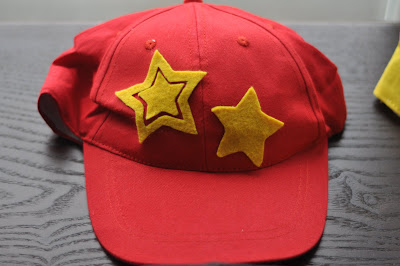 I had to be a little creative with some of the hats. This one is for Diddy Kong. He has stars on his shirt so I just put those on the hat instead. 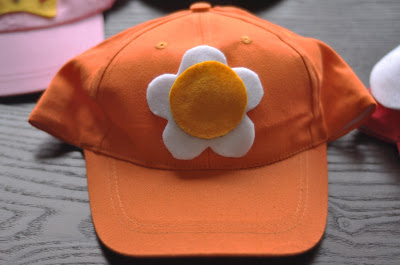 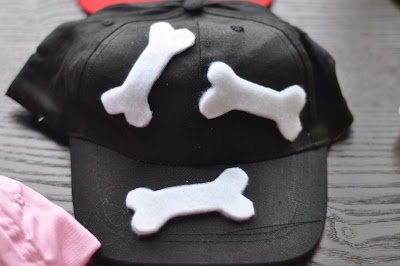 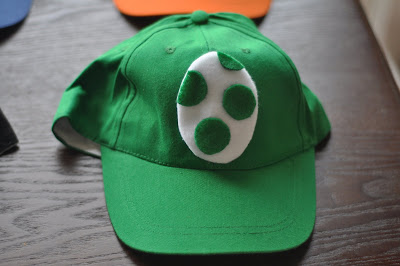 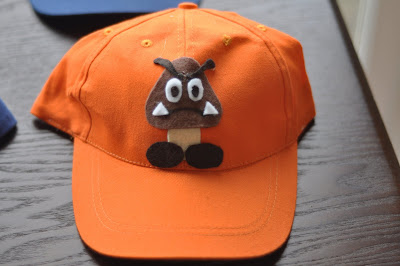 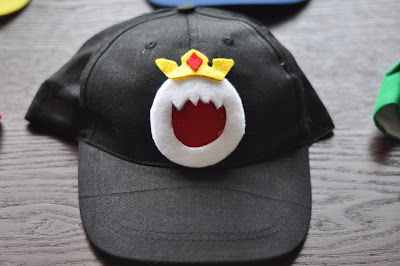 King Boo - This is one of my favorites for some reason! 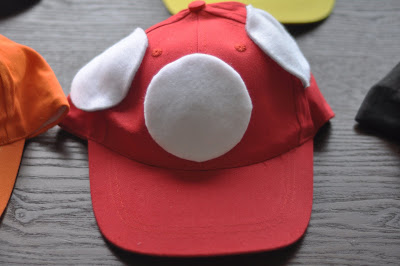 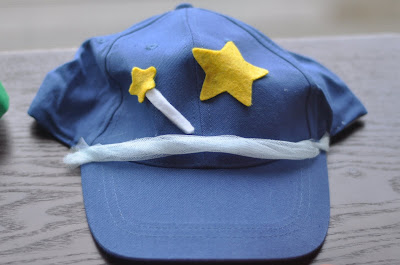 Rosalina! I totally had to make up my own ideas for this. I used a wand (since she has a wand), a "luma", and then I added the light blue tulle to give it a little something extra. 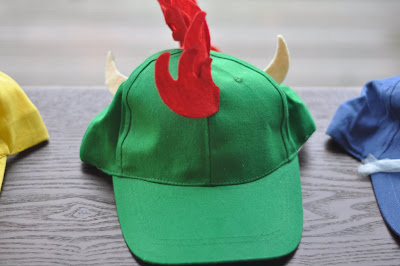 And last, but not least, Bowser! This one is also one of my favorites! The horns are made of two pieces of felt hot-glued together. The flame mohawk is made of flames alternately glued together and then glued to the hat at the bas of the flame. This is the hat my husband wore for the game when all the kids had to defeat Bowser.
Posted by Pippity Pop No comments:

This year for my son's birthday party, I decided on a Super Mario Galaxy 2 theme (that's quite a mouthful!). 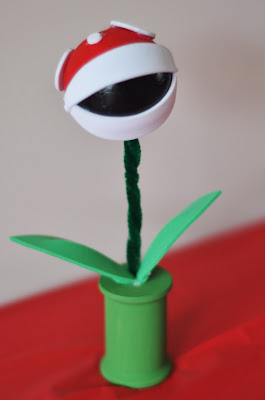 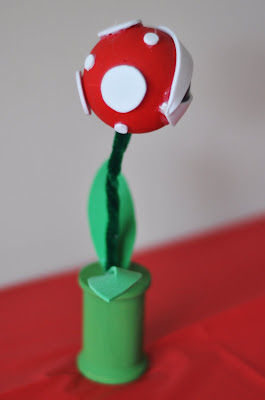 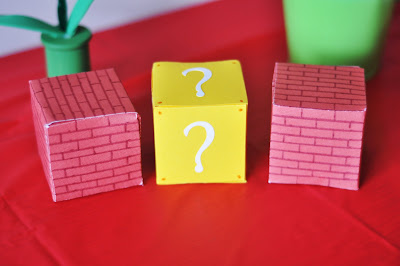 I also made some coin and brick blocks. Yes, I drew all the lines on the bricks by hand! 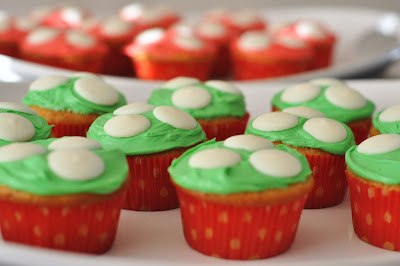 I made green and red mushroom cupcakes. The white circles are just Wilton's white chocolate melts.

Now for the fun stuff! I made hats for all the kids to wear. I was so excited to make these and I think they turned out great (yes, I am patting myself on the back...)!

For the party games, I chose actual names from the levels in the video game and went from there. 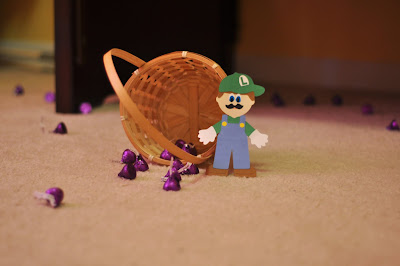 The first game was Luigi's Purple Coin Chaos! I found dark chocolate Hershey Kisses, bought 100 of them and scattered them all over the room. The kids had to collect all the "coins" that Luigi dropped. 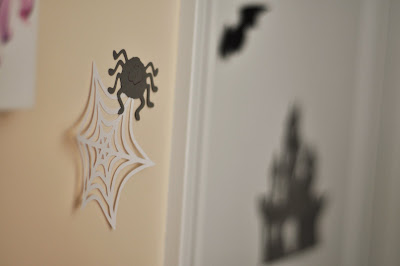 Next, Sneaking Down the Creepy Corridor. I taped some Halloween-esqe decorations in the hallway and on the bedroom door that the game was taking place in. When they opened the door they discovered... 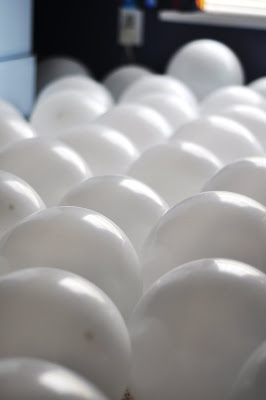 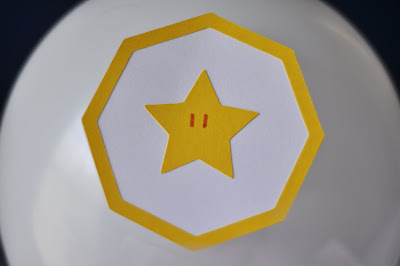 There was a Comet Medal hidden in the room full of "Boos" and the kids had to find it! 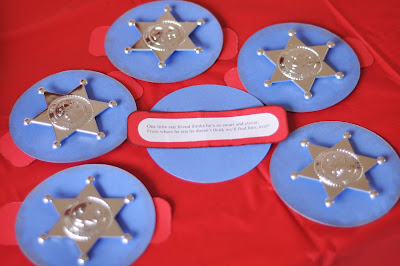 Then we played Silver Stars Pop-Up. I put together a scavenger hunt to find the five Silver Stars that were hiding around the house. (Side note - I used Sheriff badges that I found at a party store but then found actual little silver stars the next time I went back! Grr!)


The final level was Bowser's Big Lava Power Party! My husband wore the Bowser hat and the kids were supposed to throw water balloon "fireballs" at him until they defeated Bowser. Unfortunately, it rained and we had to move the party inside so we had to improvise with balled up plastic bags. It worked out fine, none of the kids cared as long as they got to throw something at an adult! 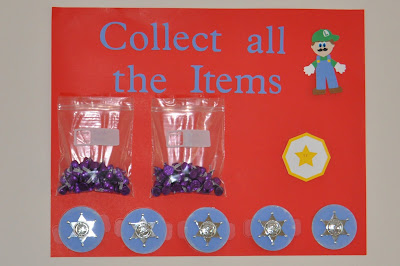 I made a poster with outlines of everything the kids needed to collect in each level. 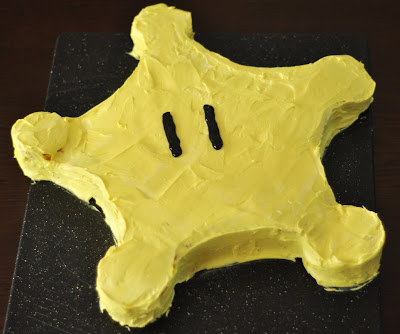 Once they defeated Bowser, the kids were awarded the Grand Star for completing all the levels. It was the sweetest reward they could have gotten!
Posted by Pippity Pop 2 comments:

This week for playgroup, we went on a Fall Nature Walk. 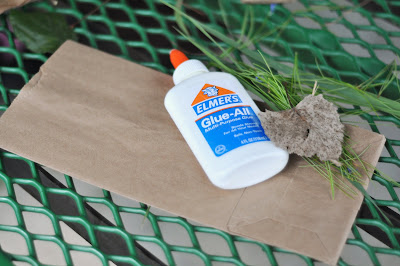 I brought bags to collect all the fall "treasures." 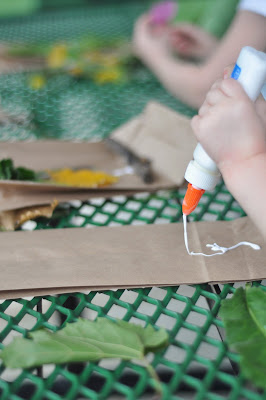 When we finished the walk we glued all of the treasures to the bag. 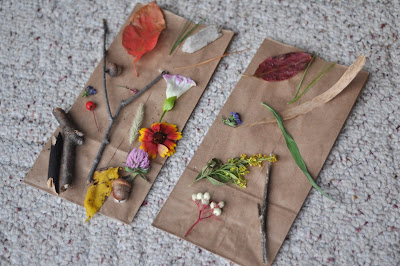 The kids had a great time and when my son got home from school and heard about what we did, we had to go on another walk so he could collect his own fall treasures!
Posted by Pippity Pop No comments:

Labels: Fall, Family Activity, Playgroup
Newer Posts Older Posts Home
Subscribe to: Posts (Atom)
Welcome to my blog! I love delving into my creative psyche and I'll use any excuse to do it! I really enjoy planning activities/parties so if you'd like some ideas or help, please let me know! I'm more than happy to do some research and planning, all I ask is for permission to post whatever ideas we come up with!