This weekend I threw a rain-themed baby shower and I had such a fun time planning it. I've come to the conclusion that baby showers might be my favorite thing to plan, the possibilities are endless!

Since the baby shower was for a friend of mine who was having her second boy, this was more of a "sprinkle" than a shower. This is what I came up with for the invitation:

It's that time of year when the snow starts to melt,
When joy for the warmth is always heartfelt.
But along with the sun there will also be showers,
To ensure that May will bring plenty of flowers.
So as we look forward to each little sprinkle,
We see Ashley's eye holds a small sparkling twinkle.
For she knows that her bud will be a tad late to bloom,
As he's set to arrive sometime in June.
So let's shower Ashley with laughs and attention,
As she showers "Baby" with love and affection! 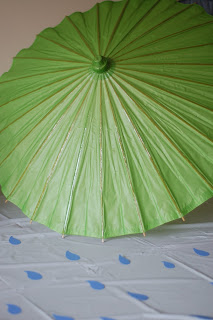 So, besides the banner, the table decorations were the things that I really concentrated on. I cut out paper raindrops to put on the table along with this umbrella... 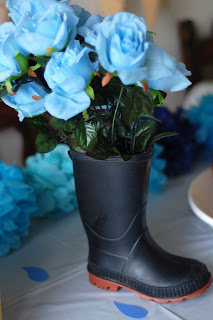 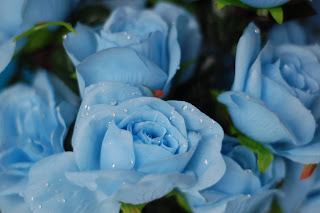 ...these awesome roses I found at Hobby Lobby with raindrops on them! I almost started jumping for joy when I found them totally by accident in the store! 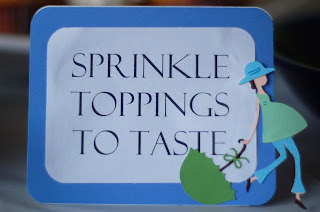 Brunch in the form of breakfast burritos and crepes was served at the shower. I'm so proud of this cute little sign I made! (Is it kind of tacky to announce that you're proud of your own stuff?) 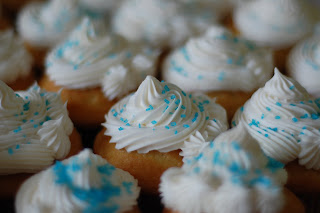 And, instead of a cake, another friend of mine made these cupcakes complete with blue sprinkles! And yes, they were as delicious as they looked! 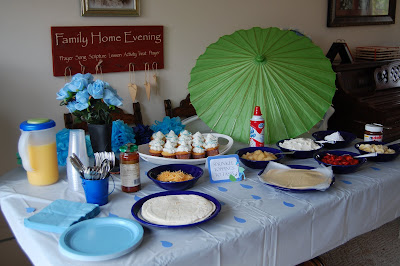 Here's everything all together! 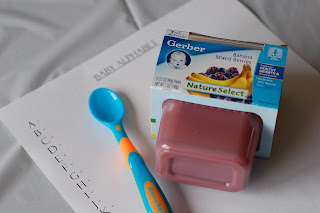 We played a game I had never seen done and it was so funny, the only downside was that it didn't last long enough! Everyone had to split up into teams of two and then choose who was the "baby" and who was the "mommy." Then I handed each team a disposable bib, spoon, and baby food. Whichever "mommy" fed her "baby" the food the fastest won! Such a great game and everyone was a great sport about it!

After the games were played and the gifts were open our mom-to-be drew three names for our raffle. The theme for the raffle prizes was "Things to do on a Rainy Day." One package was popcorn and a movie, the second was a book of variety puzzles and chocolates, and the third one was a New Moon movie card game and candy.

All in all, a TON of fun to plan and I might be using this idea again because there were so many other things that could've been done, too!
Posted by Pippity Pop 3 comments:

Labels: Baby Shower
Newer Posts Older Posts Home
Subscribe to: Posts (Atom)
Welcome to my blog! I love delving into my creative psyche and I'll use any excuse to do it! I really enjoy planning activities/parties so if you'd like some ideas or help, please let me know! I'm more than happy to do some research and planning, all I ask is for permission to post whatever ideas we come up with!