Okay, I hosted this girls night months ago and it was so much fun! It's taken me way too long to put a post up about it!

Anyone who knows me knows how much I love Survivor. I had been thinking/planning this night for several months before it finally came to fruition. 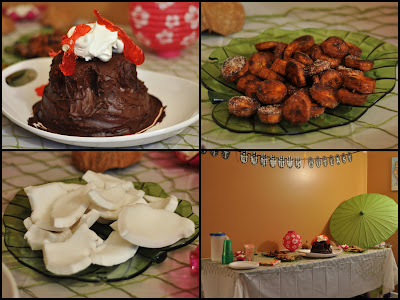 Along with a veggie tray, fruit tray, and drinks, I had some Survivor-esque food to go along with our theme. I bought fresh coconut that I cut up (I was shocked when I found out there were girls there who had never tasted fresh coconut before!), I made fried plantains (which were a little weird but went along with the theme), I made rice and put it in plastic seashell dishes, and, my crowning achievement, a volcano cake! 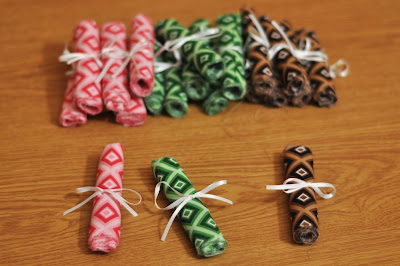 After we had eaten I had everyone draw a "buff" out of a bag to determine which tribe they would be on. Once everyone had a tribe, they all split off to decorate their "flags" (aka poster boards) with their tribe names that they made up. After the poster boards were finished it was on to the first challenge! 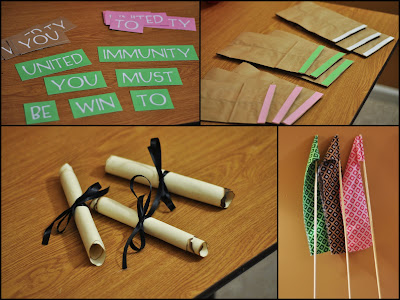 The first challenge consisted of a map, phrase, and flag for each tribe. We tacked their tribe poster boards onto the deck outside and everyone stood on their tribe mats (just towels laid on the ground). I gave each tribe a map and, on my go, they opened them up. The maps led them to three different areas around my yard where they had to find three different bags with words to the phrase they all had to put together. Once a tribe had all three of their bags, they had to go back to their mat and then open them up and start working on their phrase.
United You Must Be
To Win Immunity
When they thought the figured it out I had to double check to make sure it was the right one (there were three different ways it would be put together) and once I gave the okay the tribe had to tape the phrase to their poster board, grab their tribe flag, run back to their mat, and stake the flag into the ground. The first two tribes to finish were able to move on to the next round! 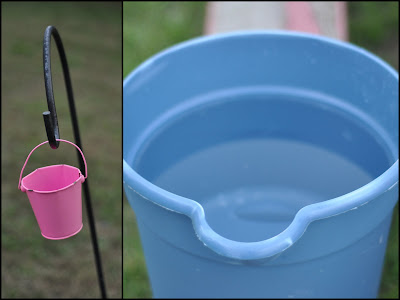 The next challenge was set up with each tribe standing in a line with each person being an arm's length apart from the person on either side of them. They had to blindfold themselves and then they were each given a small plastic cup. On each end of the line for each tribe was a bucket. On one end there was a large bucket filled with water and on the other end was a smaller empty bucket. Being blindfolded, and not allowed to talk to each other, they had to transfer water from the large bucket to the small bucket using their cups. The first tribe to fill their small bucket to overflowing won!
I didn't want anyone to feel left out so the tribe who didn't finish the first challenge still got to be involved. I split the losing tribe up and put half on each tribe doing the water challenge. Their role was to verbally help the competing tribes if they were having trouble finding each other. So, the competing tribe could talk, but the losing tribe members became "callers" who could help but only by talking, they weren't allowed to physically guide anyone's hand. (Phew, did that all make sense??)
After the water challenge was over we all went back inside for a Limbo competition! Originally it was supposed to be the tribe who won the water challenge competing against each other for individual immunity, but everyone wanted to participate and who was I to stop them from having a good time?? 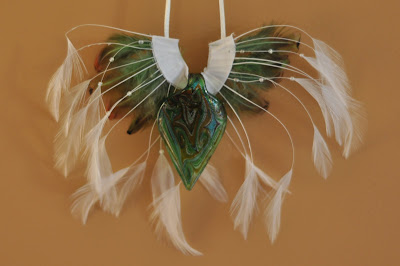 The person who won was awarded with an Individual Immunity Necklace! 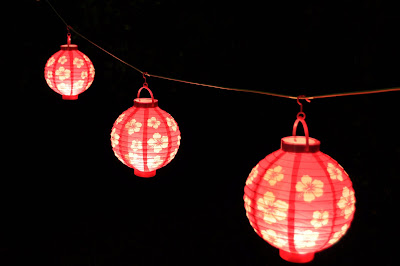 And then, it was outside for our Tribal Council! (And by Tribal Council I mean relaxing campfire in my backyard.)
Posted by Pippity Pop